Five Ways You Can Reward Your Loyal Customers

In my previous article, I mentioned briefly on the importance of rewarding your customers and how humans are mysteriously drawn to the word ‘free’. And I, of all people, would know best as I speak from experience as a former entertainment reporter where my assignments consisted of me lugging home bags after bags of freebies. … Read More Five Ways You Can Reward Your Loyal Customers 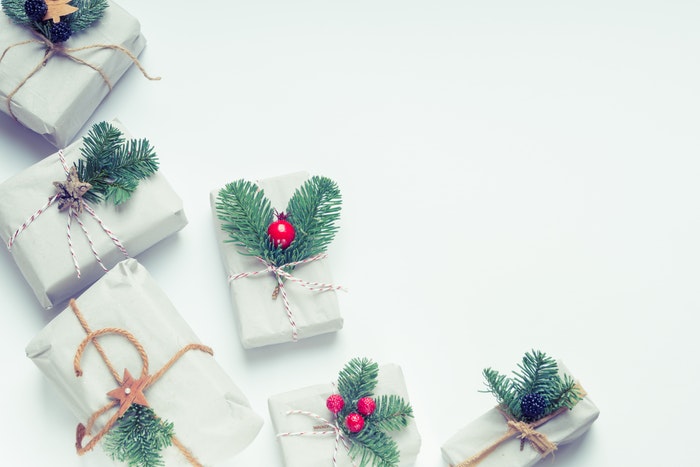 In my previous article, I mentioned briefly on the importance of rewarding your customers and how humans are mysteriously drawn to the word ‘free’.

And I, of all people, would know best as I speak from experience as a former entertainment reporter where my assignments consisted of me lugging home bags after bags of freebies.

Attending conferences soon meant that I would be contributing to my never-ending pit of notebooks, pens, keychains, USB flash drives, portable chargers, t-shirts, and caps. I even have a frozen beer slushy maker.

We’re not cheapskates. We just like free things; whether or not they were obtained as corporate gifts when you attend a function, freebies from vendors in an exhibition, or even free cheddar cheese samples from your local grocery store aisle.

And it definitely works the same for when you reward your loyal customers for continually patronizing your business. Jeanette McMurtry, a psychology-based marketing expert explained this natural obsession towards freebies.

“Extrinsic motivation, or our behavior which is driven by the anticipation of being rewarded by others for engaging in specific behaviors, drives much of the choices we make in life — how we perform our jobs and what products we choose to buy,” she said.

“When we get something cheaper than usual, more than what we paid for, or something for free, as a rewards program often delivers — in our unconscious minds, we are stronger, better, richer, farther or have more resources than others, and so we are posed to survive.”

But, before you start giving out freebies and rewards to your loyal customers, let’s take it one step at a time. We’ve already established the fact that you need to equip your business with a kick-ass member program. Next, you need to do a little research about the different systems driving these various rewards programs.

Hawk Incentives Research found that 79% of consumers look for deals in loyalty and reward programs before making a purchase.

Unfortunately, rewards programs cannot be applied as a one-size-fits-all system for businesses. It’s important for business owners to do a little studying about these programs in order to decide which works best for their business — taking into consideration the type of product or service that the business is offering, what the clientele is like, etc.

Keep scrolling to read a compilation of some of the popular rewards program in the industry today, accompanied by a few pros and cons for better understanding.

This is the most common type of rewards system in a loyalty program, and you’re probably familiar with it as well. Think credit card rewards.

This type of rewards system encourages members to spend more frequently by offering the ability to earn points after hitting a predetermined ‘benchmark’ during their transaction. The points are accumulated and may be used to redeem rewards — functioning almost like cash itself. In other words, points represent a brand’s currency.

An article focusing on the psychology and importance of rewarding customers mentioned the way rewards are presented and earned can affect people’s willingness to work towards earning them as well as promoting them within their social circles.

The writer also stated: “The value that companies attribute to points can greatly influence perceptions, even when the end goal is proportionally the same.”

I would say the tier system is like an extended version of the points system, but is more suitable for businesses that encourages long term and high purchases.

Just like the points system, members get to earn points after each transaction and use them to redeem rewards. Additionally, this system records the total amount of accumulated points, which determines their ‘rank’ in the program. Each tier avails different set of rewards or benefits which usually increases in value as members progress on. In a nutshell, the more you spend, the faster you get promoted, and the better the rewards.

Rewards system as such entices members with the exclusivity of each tier, naturally encouraging them to spend more.

Take Sephora’s Beauty Pass loyalty program as an example. Every new member starts off with a White Card, and then they get upgraded to the Black Card and subsequently to the Gold Card after hitting the transaction benchmarks for each tier. 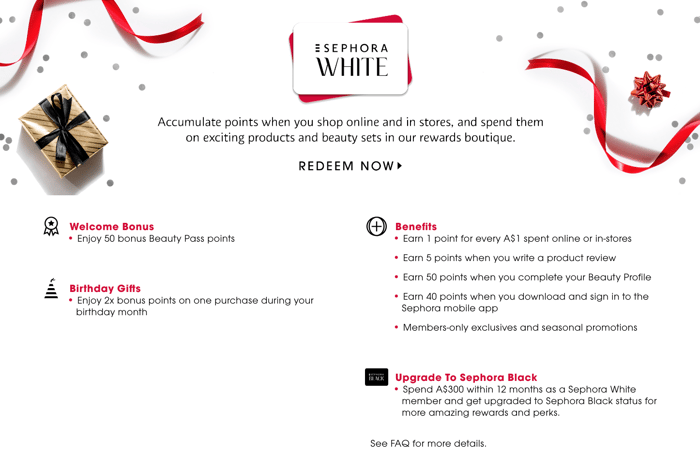 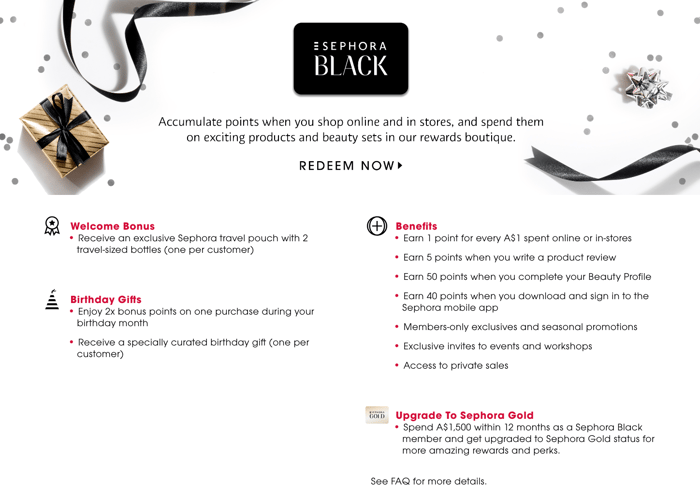 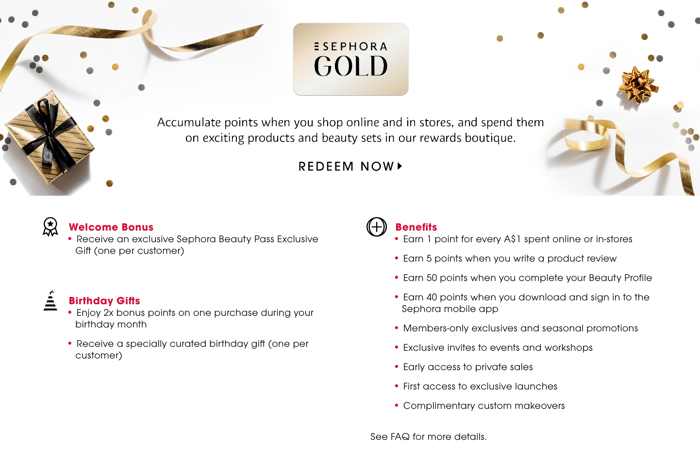 You probably have one or two of these in your wallet from coffee shops. These are your generic “buy five coffees and get your sixth free” sort of program. Typically, after a purchase is made, a stamp is issued onto a physical card that is distributed to customers. A reward will be given after a specific number of stamps have been collected, promoting customer retention.

It’s probably the simplest of all rewards programs, but has the biggest drawback of not having customer insight. The program only encourages customers to keep making purchases to redeem their reward, but doesn’t collect any other information such as their name, preferences, etc.

But of course, digital stamp cards are a whole different thing.

Everyone loves a good discount. Just look at how our malls are jam-packed with shoppers during festive season mark downs. Businesses love them too, because discounts create a sense of urgency.

The rebate program works in a way where customers are issued rewards in forms of cash back or discounts — after a transaction has been made — which allows them to discount their future purchase.

Customers will definitely benefit from systems of this sort because of its discount-centric nature, but whether a business can is the biggest concern. Many entrepreneurs share the same idea that giving out too many discounts will not only affect your sales, but the reputation of your business as well.

I came across an article that made me think about discounts from a different perspective. Here’s what I found insightful:

“When you offer a discount, whether it’s the first engagement or the fifth engagement, there’s no going back. As soon as you lower your price, your customer will expect to see the same thing next time. Or, they’ll hold out until you offer another “special”. And most likely, they won’t purchase without it. And while a discount may seem like that’s your only option, it’s not. You don’t want to set the precedent that every time your customer buys from you, it’s at a discounted price. That’s just bad business.”

Many aren’t very open to the idea of paying a certain fee in order to be a member of a club or program. But what happens when you entice them with the rewards that comes with it?

I used to be very resistant when it came to the whole “pay to be a member” thing, until I discovered Spotify.

Let me take you back to how it all started. So, you probably know that apart from protein shakes, water and lifting gloves, music happens to also be a crucial element for most gym rats. There came a time where downloading music and storing them into your iPod or phone weren’t practical anymore because it takes up a lot of data storage. Then music streaming platforms like Spotify appeared and eventually became my best friend slash gym buddy. But like all best friends and gym buddies, they too, come with flaws. Spotify was a complete buzzkill whenever I was about to lift heavier, or run faster because it wouldn’t stop playing ads. I literally only needed it to sing me songs in order to workout in peace.

The only way to stop this?

“Want a break from the ads? Watch this short video to receive 30 minutes of ad free music.”

Of course, the premium account allows you to do a whole bunch of other things like hitting the skip button unlimited times, selecting any songs, and downloading them. Stuff that regular Spotify members don’t have the privilege to do.

Think about it this way: more often than not, a free loyalty program is built in such a way where it has to appeal to the masses. Paid loyalty programs are the complete opposite as they are able to offer more value to members via customized experiences.

Ready to get onboard the loyalty program train? Sign up for a free demo!

For most businesses, battling a pandemic is unprecedented. Should you give more discounts? Should you move everything online? Throw in free gifts?...

How To Create Rewards That Deliver Value

More often than not, business owners fail to grasp the importance of giving rewards to their loyal customers.  Whether it’s because they feel it’s a...

Stamp cards are the easiest way to hook customers in and build their loyalty. But are you doing stamp cards the right way?