How To Create Rewards That Deliver Value

More often than not, business owners fail to grasp the importance of giving rewards to their loyal customers.  Whether it’s because they feel it’s a waste of their resources or they’re worried it would not translate into profitable results —but I cannot emphasize enough that a little giving can actually go a long way. Apart… Read More How To Create Rewards That Deliver Value

More often than not, business owners fail to grasp the importance of giving rewards to their loyal customers.

Whether it’s because they feel it’s a waste of their resources or they’re worried it would not translate into profitable results —but I cannot emphasize enough that a little giving can actually go a long way.

Apart from offering great products and delivering good services, rewarding your loyal customers is also a pivotal factor in attracting recurring revenue for your business.

“Building loyalty with 5% more customers would lead to an increased average profit per customer of between 25% and 100%.”

We’ve heard this plenty of times.

So much so businesses today have been reported to be investing more in loyalty programs, simply because studies have revealed that acquiring a new customer costs five to 25 times more than retaining an existing one.

But the concept of rewards programs isn’t just as simple as giving them any kind of freebie to get them to come back. Ultimately, it has to be the kind of reward that really incentivizes them to return because they feel valued by your brand. It’s all about delivering great customer experience.

Loyalty doesn’t just mean encouraging customers to buy from you again… Rather to spend more with you, feel positively about you and recommend you to others… Brands must deliver because customers can switch or change their habits… They must inspire loyalty from the very first touchpoint to the end of the customer’s journey.

Here are a few quick tips on how to create rewards that can make your loyal customers feel valued.

Offer rewards that interest them

Sure, discounts are great. We all love a good discount, but just because they appeal to a majority of your customers doesn’t necessarily mean they will appeal to everyone. Especially if your business is offering only one type of reward, which has a tendency of lowering its perceived value for potential members.

Try to spice things up by diversifying your rewards and offering your loyal customers with more rewards that may appeal to them — though, I’ve to remind that it varies from business to business. It could be a free cup of coffee on their fifth purchase. Or VIP passes for exclusive launches. Or practical merchandises like travel mugs and umbrellas. 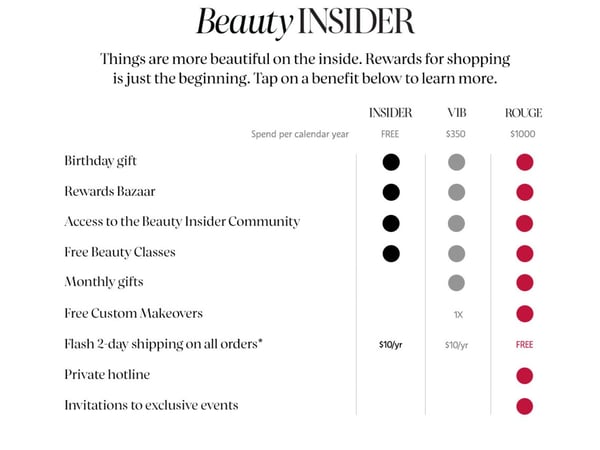 Take Sephora’s Beauty insider program for example. With over 10 million Beauty Insider members and counting, their membership tier system rewards program not only entices members to keep on spending in order to climb the membership ladder, but also attracts new customers to join because of its lucrative rewards.

As you climb further up the tier, members get to enjoy exciting rewards such as free beauty classes, make overs, and invitations to exclusive events where you get to purchase newly launched items before it goes live to the public. Adding to the last point, these aren’t just your regular mundane previews, Sephora brings in popular celebrities such as Sandara Park of South Korea’s famous K-Pop group hit 2NE1, Rihanna, and other well-known make up artistes for these events.

Instead of using points just for discounts, the program allows members to also use their rewards to claim various beauty products. These rewards also change from time to time, and usually feature popular trending products. It’s no wonder this program is such a hit.

Don’t make them too hard to redeem

The most common mistake that businesses make is offering rewards that require a very high amount of points to redeem. This is a common attempt to make customers return and spend more frequently to redeem a specific reward, but this usually backfires.

Your brand will most likely lose out to other competitors that are offering rewards which are easier to earn, especially in a highly competitive market.

A recent study reported some of the most important aspects consumers value in a loyalty program, which were ease of redeeming rewards (55%), ease of earning points (51%), monetary rewards (51%), access to exclusive deals and coupons (36%), and easy enrollment options (22%).

An interesting way around this would be “The Endowed Progress Effect” method which concludes that consumers are twice as likely to reach their loyalty incentive when they are given a head start at the beginning of their journey as a member.

For the purpose of this study, researchers handed out 300 loyalty stamp cards to customers at a car wash — half of them required 8 stamps to get a free car wash, while the other half required 10 stamps, but already had two bonus stamps as a head start on it. Results of the study revealed that only 19% of the customers with the 8-stamp card managed to earn a free car wash, while 34% of those with the 10-stamp cards earned their reward.

Researches concluded that this strategy, dubbed as ‘artificial advancement’, creates a sense of accomplishment for customers with the use of a simple head start. It also gives the stamp card more value compared to an empty one.

Times are changing, and it’s important for us to learn how to adapt in order to keep up. Stay updated with current trends — it could be anything, like implementing chatbots on your website, using videos on your social media pages for marketing, or even getting celebrities or influencers to endorse your brand. Don’t underestimate the power of influence from viral social media trends as well.

One example of a popular trend that successfully took off includes the anti-plastic-straw campaign in the attempt to reduce the demand for plastic production. Remember the video of a turtle with a plastic straw lodged up its nose that went viral? That was the catalyst that prompted many consumers to take a stand against the use of plastic straws, and businesses are actually starting to listen.

Many F&B outlets, from large restaurant chains like McDonald’s to small cafés have ditched the use of plastic straws. And while some have just decided to serve drinks without straws, some restaurants are using stainless steel straws to support this movement in a new and trendy way.

So, it all goes back to identifying what really interests your loyal customers. And what better way than to do it with the help of a well-equipped loyalty program?

Learn more about how a loyalty program can help you understand your customers’ behavior and deliver a better customer experience.

Recently I headed for my usual manicure appointment and upon payment, the cashier informed me that my purchases for that day entitled me to a reward...

Customers are getting smarter each year – and becoming more demanding.  Great products and prices are not enough if you want to stand out from your...

Five Ways You Can Reward Your Loyal Customers

In my previous article, I mentioned briefly on the importance of rewarding your customers and how humans are mysteriously drawn to the word ‘free’....